There is a group of us over on Twitter who have connected through our following of Susan Branch, and a number of months ago, we began a book club.  We have read a variety of selections through the months, of course including the latest three of Susan's own books.

Our most recent selection was this one.... 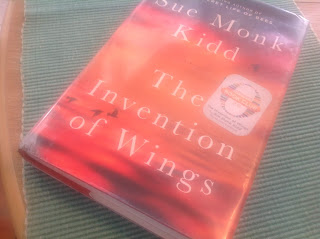 I have read other selections by Sue Monk Kidd....The Secret Life of Bees, The Mermaid Chair, The Dance of the Dissident Daughter (autobiographical)....and have enjoyed each one.  The Invention of Wings is a work of fiction, though inspired by actual historical facts.

Sarah Grimke and her sister Abigail are historically known as abolitionists during the years before the Civil War when slavery was widely practiced in the Charleston, SC area where their home was located.  The Grimke family was no different from others in their area, and Sarah was presented with her own personal slave, Handful (or Hetty), as a 12th birthday "gift."

There was something about the whole slavery issue that didn't set well with Sarah, and she attempted to cancel that sort of relationship with Handful.  She quickly learned, however, that her approach was not accepted by the family.  Neither was her desire to embark on an educational path that would lead her in her father's footsteps.  These were the days when women just didn't enter the professional world that was dominated by men.

Sarah was not to be deterred, however, and becoming an influence on her younger sister, Abigail, the two of them eventually set out to mount opposition to slavery and calling for the freeing of slaves.

The novel inserts fictional accounts, though based on what has been learned through the years, of the interaction between slaves and their "masters," as well as their fate as they maneuvered through their difficult existence.  It is my opinion that one of the darkest spots in our history is the practice of slavery.

Are you giving yourself time for reading these days?  What are you currently reading?  Have you read anything you would recommend recently?
Posted by Nellie at 6:38 AM