....was a beautiful one here!  It was just right for taking a trip!  So, we were up early on Saturday morning to be on time for this!

This was a special week-end at Emory and Henry.  As the program mentions, it was the 2013 Induction Ceremony of several former students into the Sports Hall of Fame.  Also on the program was the retiring of the football jersey of a former football player who has become a golf buddy of The Husband during More Than A Vacation events.

There were quite a number of MTAV participants present, and it was rather like a reunion.

Of course, there was a football game!:-)


We had been invited to attend a Third Quarter reception in the new (for 2012 season) field house.

Emory and Henry's opponent for the game was Ferrum.  The Husband and I sat on the 50-yard line to watch some of the game.  It was exciting to see Emory and Henry play in a winning fashion.

Before leaving campus, I took this picture. 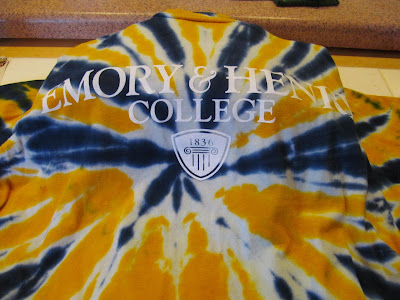 I hope you are ready for a good week.  It is going to be like summer around here today, with a predicted high temperature of 90 degrees F!